Some History of Indoor Plumbing in Boerne, TX. 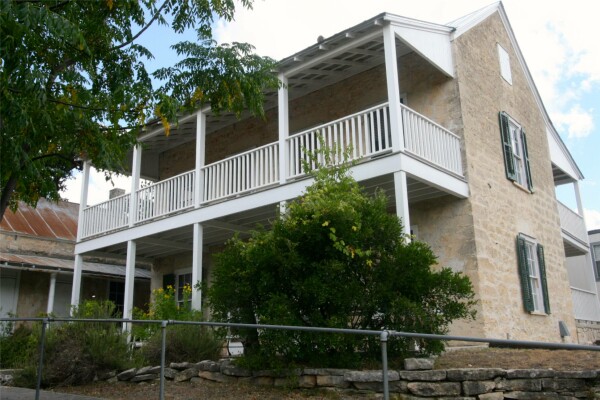 This structure was built in the late 1880s as a residence for German native William Kuhlmann (1856-1918), a successful pharmacist and landholder. He sold the home in 1908 to Selina Long King (1831-1910), whose sons operated the local King & King Lumber Co. The Boerne Independent School District owned the house from 1920 to 1951, using it for rental property as well as for school-related purposes. Hill Country artist Harry Anthony DeYoung (1893-1956) leased the house for two years while teaching art in San Antonio. The Kuhlmann-King house has been owned by the city of Boerne since 1951. (on W side of city hall)

Two story rubblestone symmetrical with two story gallery across the front (West) side. Originally the house had two upper and two lower rooms. The gallery on both floors extended around to the entire south side. The stairs to the upper floor were on the outside of the house on the East, or back side. As was the custom, there were no closets in the entire house. The house has one central chimney, with the fireplace on the southwest room. The remaining three rooms had openings into this same chimney and wood stoves were used for heating. The walls in the house are approximately 15" thick and the 9 foot ceilings inside are beaded board. The upstairs floors are still the original random width planks varying between 10" and 12" in width. The floors on the first floor have been replaced and are now of 3" narrow pine flooring. The house had a gabled roof and 6x6 sash windows. Today the gallery on the south side of the house is gone. It is believed that the south portion of the porch was removed in the late 1920s when a major change in the house was made.The wooden portion of the house was added to the east side about the same time the south side gallery was removed. This new addition brought the house the newest conveniences. The outside stairs were removed. Traces still show on the rock and the door upstairs is still there. New stairs were built inside the southwest room. Closets were built in this room as well as the room directly above. A gallery and a modern kitchen (to take the place of the separate outdoor kitchen) were added to the first floor. On the second floor, a bathroom was added above the new kitchen and a second floor gallery was added above the new one on the first floor. With this new addition all the plumbing and water pipes were used without having to go through the thick rock walls.

The land, out of Lot #9 and #10, on which this house stands was sold by John and Helene Werner to William Kuhlmann on March 26, 1883. Just what year the house was built is not known thus far. It was built by William Kuhlmann between 1885-1890.

Mr. Kuhlmann returned to Germany to marry his sweetheart, Marie, and brought her back to live in this house. On Dec. 27, 1896 Marie died during childbirth. The child never lived. Marie was born Sept 13, 1854 in Germany. The couple is buried in the same grave in the Boerne Cemetery.

Mr. Kuhlmann sold this house with improvements to W.F. Shirer but Mr. Shirer sold it back a year later because of the lack of finances.

In 1902 Mr. Kuhlmann sold the house to Selina Long King. The King family lived in the house until 1920 when Mrs. King died. The house was sold to the Boerne School District.

The house was used to extend the facilities of the school which was in the adjacent building just south of the house.

In 1951 the school system no longer needed the buildings in this location, thus it was sold to the City of Boerne.

In 1971 the Boerne Area Historical Preservation Society was given a twenty-five year lease on the house for a museum.

Oops, you forgot something.

The words you entered did not match the given text. Please try again.

Reply supreme clothing
7:30 AM on July 11, 2020
I needed to create you one little bit of word to thank you very much as before with the unique techniques you have discussed above. It was quite wonderfully generous of you to offer extensively just what some people could have supplied as an ebook to make some profit for themselves, specifically now that you could have done it in the event you wanted. These good tips likewise worked as a fantastic way to be certain that other people have the same interest just like my very own to understand more and more pertaining to this problem. Certainly there are lots of more pleasurable moments up front for many who go through your website.
supreme clothing http://www.supreme-clothing.us.com

Reply off white clothing
2:08 PM on July 13, 2020
I intended to put you one very little word to finally say thanks a lot the moment again for your personal wonderful information you've featured on this page. It's quite particularly generous of people like you giving without restraint all many individuals might have supplied for an e book to earn some dough for themselves, precisely given that you might well have done it if you ever considered necessary. Those suggestions in addition served as the fantastic way to comprehend other people have the identical eagerness much like my personal own to know the truth a little more on the subject of this issue. I'm certain there are several more pleasant periods ahead for people who examine your website.
off white clothing http://www.offwhiteclothing.us.com
/